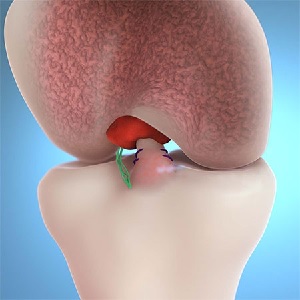 The BEAR implant a novel first technology to clinically demonstrate the ability to heal the torn Anterior Cruciate Ligament (ACL) and restore its original orientation and anatomy. This presents a significant improvement, because until now the torn ACL would have been treated with a procedure called ACL reconstruction. During ACL reconstruction the surgeon removes the torn ACL and replaces it with a tendon graft harvested from another part of the leg (called autograft) or uses a tendon graft from a deceased donor (called allograft). Although ACL reconstruction is effective, this procedure has some drawbacks. Using an autograft from your own body is associated with a more invasive procedure and can leave your body with sometimes permanent deficits. Using allograft can be associated with increased re-tear rates in young, active individuals. Furthermore, ACL reconstruction does not completely restore normal ACL anatomy and joint mechanics and some people are not able to return to the same level of activities after ACL reconstruction. In addition, ACL tears are associated with a higher risk for development of osteoarthritis.

The BEAR implant is different because it works with your own blood to heal the torn ends of your ACL back together. BEAR is supported by highest quality scientific data and 15+ years of research. It enables the restoration of patient’s own ACL to it’s anatomic orientation with the potential for more normal joint mechanics. By preserving the native ligament, this technique helps to preserve important mechanoreceptors contained in the native ACL which are otherwise lost when the ligament is removed during reconstruction of the ACL with a tendon graft. This preservative effect of BEAR has been shown to give patients a higher level of confidence in their knee and avoids the frequent complaint that the knee never felt “normal” described by patients after ACL reconstruction. Experimental studies have also suggested that BEAR reduces the risk for post-traumatic arthritis after ACL injury, emphasizing its potential importance for long term joint preservation.

Due to its groundbreaking nature, the BEAR implant has received special DeNovo clearance by the U.S. Food and Drug Administration and is indicated for skeletally mature patients at least 14 years of age with a complete ACL rupture, as confirmed by MRI. Patients must have an ACL stump attached to the tibia to allow for the restoration of the ACL and the implantation must be performed within 50 days from the original injury. BEAR has been shown to be effective across a broad range of tear types (Type 1 through Type 4).

Significant Advantages of BEAR include: